Faction Competition is held in the Cinderstone Moor and Ynystere region during the War state.

During the faction competition, the first faction that reaches 3,000 points can capture the area during the peace period.

During the peace period, a large number of guards of the victorious faction are added, and the demilitarized zone of the trading post is released.

When the War state starts in Cinderstone Moor and Ynystere, faction scores that can be obtained by each faction will be added. -It is divided into 3 levels and lasts for 10 minutes, and there is a difference in the number of guard towers that can be summoned at each stage.
-Some towers cannot be summoned with a certain probability.
-You cannot re-accept the quest for 10 minutes after completing each step. 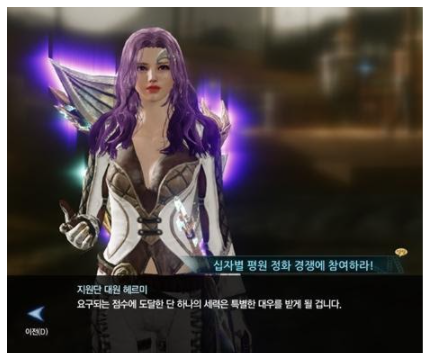 Ynystere when the war time [Purify Ynystere!] you can accept the repeat quest from Onne, Glitterstone 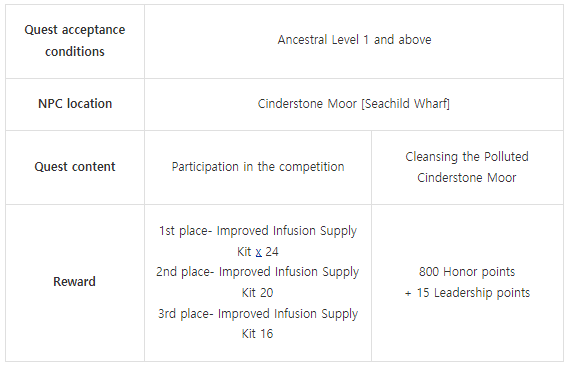 -The faction that achieved 3,000 points in the faction competition will receive 3 Blue Salt Bond , 10 Gilda stars, and 300 Honor Points to [Blue Salt Brotherhood Enta] appearing at the Seachild Wharf during peace time after victory . Can be obtained. (Once a day) 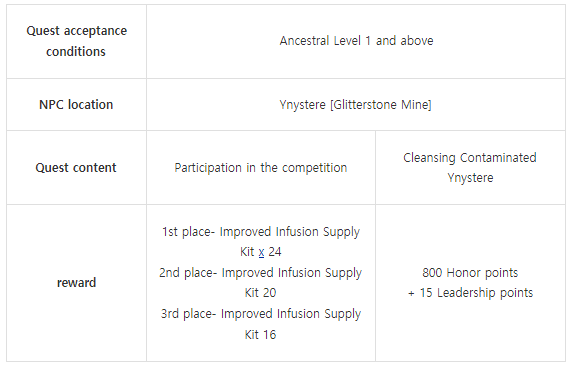 -The faction that achieved 3,000 points in the faction competition was awarded three Blue Salt Bond , 10 Gilda Star, and 300 Honor Points to the [Blue Salt Brotherhood Sifty] who appeared in Glitterstone during peace time after victory . Can be obtained. (Once a day)
Reedwind - Faction Competition

The faction points that can be obtained for each faction during the war time of the Reedwind.

-You must collect more than the required score until the end of the war, and if you maintain a higher score than other factions, you can summon the Furious Thunder Wing Titan.
-Points can be obtained by completing daily quests in the Reedwind or by killing monsters.
Reedwind Score Quest

When it is time for the War of the Reedwind, you can accept the daily quest [Thunderwing Titan Competition] from Battle Leader Lilia at the Reedwind Crimson Watch Camp 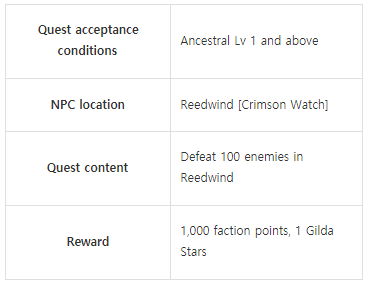 Monsters list for obtaining points in Reedwind
You can get 5 faction points by killing "Strong" or "Elite" monsters in the reed field.