Exile is the ability to change a faction from the current faction to another.

-Exile cannot be changed for two months once the power changes, so a careful decision is required.
-You can acquire Exile items by performing simple quests, and you can use them if there are enough Exile capacity of faction information.
-Based on faction activity, you can only move from dominant to inferior.
-The capacity is compared to the dominant and inferior forces, and the greater the difference in the activity score, the more people can move.
-Exile requires 5,000 or more language proficiency of the forces to move in order to communicate smoothly .
-In order to prevent future race quests from not proceeding, only those who have completed the quest <A Secret in Sun's End> can exile.
-This quest can be found in Chapter 7 of Race Quests.
-When exile from the Desperado forces to another faction, you can exile without completing the quest <A Secret in Sun's End>
-Only those with a previous leadership of 100 points or higher and equipment points of 8,000 points or higher can accept the Exile quest.
-After completing the Exile quest, you cannot accept the quest again for 5 minutes.
-Heroes of each faction must maintain their current position and are therefore excluded from exile.
Condition summary

-Can only exile from the dominant to inferior forces, and must have capacity left
-5,000 or higher language proficiency of the forces you want to go
-Equipment score of 8,000 or more
-No waiting time
-<A Secret in Sun's End> Completion ( except when moving from an Desperado to another faction)
-100 or more previous leadership skills
Changeable forces

In the [Community> Factions> Faction Information] tab, you can check the information on the factions and capacity currently accepting Exile.
The figures are reset at 0 o'clock on Sunday when the dominant/inferior judgment is made. 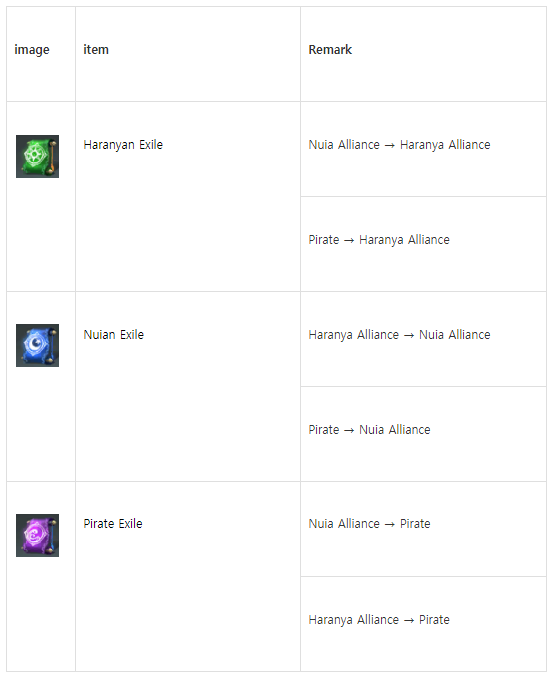 -You can try to change your faction and fail if the conditions are not met.
※ If you have succeeded in changing the faction , you can receive a Exile Support Bundle for 5 minutes from the NPC who gave you a quest as a reward.

'Haranya Alliance' and 'Nuia Alliance' have been added. It is a Faction created by a group of exiles.

-The Dwarves of the Nuia Alliance are the'Andelph' Faction, and if they change their Faction to the Haranya Alliance, they will be changed to 'Haranya Alliance'.
-If you go back to Nuia Alliance, you will return to'Andelph'.
※ Please note that when a faction is changed, quests that cannot be progressed in the changed faction are automatically abandoned, and the territory contribution is reset.

Return request
If a faction is inferior, the King's representative will send a return request via mail each time the hero's term begins after the decision date.

-Requests for return are sent to other faction heroes (candidate registrants) from their home country who are in the middle or dominant faction.
-The target who accepts the return request immediately changes its power and can acquire Earth Lunascale: Mastery.
-There are no conditions for acceptance of return, and the waiting time for Exile does not apply to change of faction through a return request.
-Mail requested to be returned will be deleted after 5 days of storage.
Contents
1 2 ... NEXT